The funeral and burial of Archbishop Agapit of Stuttgart 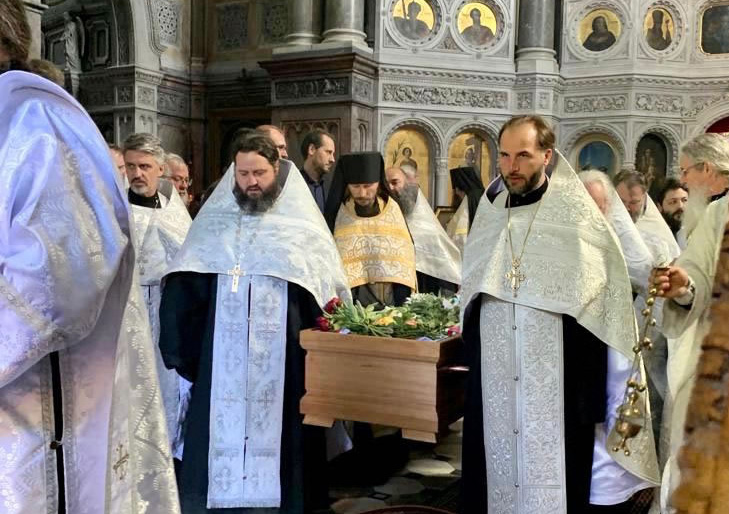 On Monday, June 1, 2020, the after-feast of the Ascension of the Lord, His Eminence Metropolitan Mark of Berlin and Germany celebrated Divine Liturgy at St Elizabeth Church in Wiesbaden, Germany, along with His Eminence Archbishop Tikhon of Podolsk. The archpastors were joined by a multitude of clergymen of the German and other dioceses.

In the center of the grand temple was the coffin of newly-reposed Archbishop Agapit of Stuttgart, who died on the feast of the Ascension of the Lord. Praying at the service were the relatives and friends of the reposed hierarch, including his brother, Subdeacon Mikhail Gorachek, the Warden of St Nicholas Church in Frankfurt, and many believers.

Before Communion, Protopriest Nikolai Artemoff, Secretary of the German Diocese, read a eulogy, sharing his memories of the late archbishop’s childhood and youth, his first steps towards entering the monastic life and service to the Church of Christ in Wiesbaden, and the good qualities that earned him the love of his brother archpastors, clergy and flock.

After Divine Liturgy, the coffin of the late archpastor was taken to the nearby Russian Orthodox cemetery, where the monastic funeral was performed. Vladyka Tikhon addressed the assembled faithful as the coffin was carried out, expressing his profound empathy. He stressed that Vladyka Agapit served as an example of patience, humility and pastoral and patristic sober-mindedness. After the Gospel reading, His Eminence Metropolitan Mark of Berlin and Germany delivered a eulogy in which he pointed out the main virtue of Archbishop Agapit in his service: obedience. Thanks to this quality, His Eminence was able to calmly, with profound faith and utter reliance on the will of God, which is all-good and salvific, assume all labors imposed on him: monastic, diocesan and Church-wide.

Archbishop Agapit’s body was interred next to the grave of Archbishop Nathaniel (Lvov) of blessed memory, whom the young monk Agapit of St Job Monastery at one time lovingly tended to.

Source: Official website of the Synod of Bishops of the Russian Orthodox Church Outside of Russia